Can't wait for this month's content update if there is one... 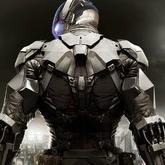 By WkingDisaster,
May 27, 2020 in [Don't Starve Together] General Discussion