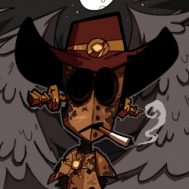 What are your feelings towards Wormwood in DST?

By Xanadu2003, Wednesday at 04:10 PM in [Don't Starve Together] General Discussion