If Don't Starve become a cartoon, what would you want it to be about? 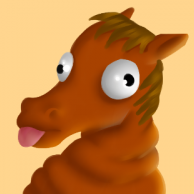 By HorseyTheYes,
December 7, 2019 in [Don't Starve Together] General Discussion