GoH Steam Market prices are getting out of control ($2000 Wilson?!) 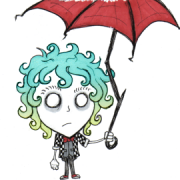 By CameoAppearance,
October 26, 2020 in [Don't Starve Together] General Discussion