Weird question, but why isn't there more DST speedrunning going on? 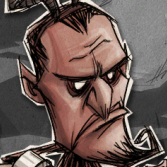 By loopuleasa,
January 1, 2021 in [Don't Starve Together] General Discussion