Know Your Anenemy (Now with video yay I guess) 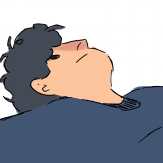 By Pruinae,
September 8, 2019 in [Don't Starve Together] General Discussion