About that idea with a DST series... 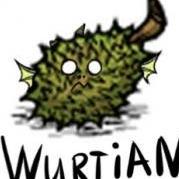 By Falkenpelz,
December 20, 2020 in [Don't Starve Together] General Discussion