My idea for WX's refresh 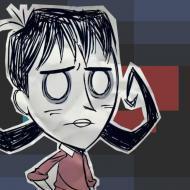 By DarkPulse91,
August 14, 2019 in [Don't Starve Together] General Discussion