What do you think about the RWYS Wormwood changes? 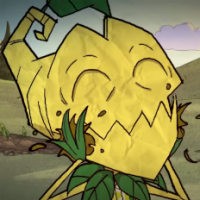 By ShakerGER,
January 8, 2021 in [Don't Starve Together] General Discussion