theory Theory of second portal on the moon island 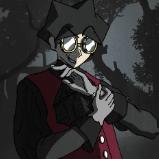 By Deerclops Mika,
July 18, 2020 in [Don't Starve Together] General Discussion