The Moon is watching (literally) 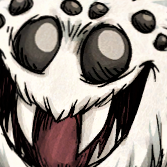