The nerfed wheezwort no longer self planting anymore? 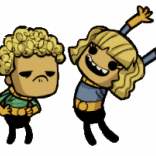