suggesion New statistic in History of Travels: Mostly Played As 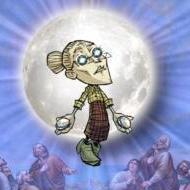 By Sapientis,
December 10, 2020 in [Don't Starve Together] General Discussion