Here are save files for autosaves on a colony at two consecutive cycles, so Tunnel Cycle 5.sav and Tunnel Cycle 6.sav. You'll find three steam turbines built to the left of the printing pod. Originally, all three turbines began with 300kg (20kg/tile) before starting.  After a few cycles, I added a manual automation switch to try and activate the bug. I haven't succeeded yet with that.  I added a timer on 10/10 default settings to the third turbine. After playing around for a few more cycles, the steam content dropped to 293.6 kg during the off phase. 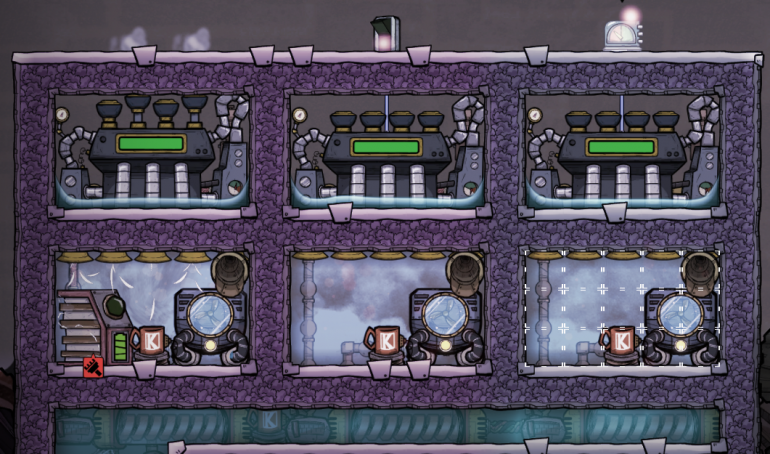 I loaded my cycle 5 game 3 times today, seeing if the bug would activate on save/load.  The third time I loaded the game, I started loosing steam nonstop.  By the end of the cycle, the steam content in the lower chamber falls from 293.6kg to 162.4kg. That's over 130kg of steam lost in one cycle to this bug.

I don't know exactly what caused the bug. I deactivated all mods once I purchased the DLC. I do have sandbox and debug enabled.  I cannot replicate the bug with every loading of the game. I did reload the game without exiting ONI completely (maybe it's related to that, who knows).

What I do know is that I lost >130kg of steam in one cycle because of a single turbine.


I cannot guarantee you will be able to reproduce it.  Open cycle 5, let it run for a bit.  If the steam content doesn't start lowering, then reload the save. Try reloading the save several times until the bug starts occurring.

You can find people posting questions about this on the forums, on reddit, on discord, and on steam. The current "solution" is to add a liquid vent to the steam chamber, with a pressure sensor to refill the turbine when steam disappears.  When I ran this test above, the steam loss did not stop.  It kept on going throughout the entire cycle.