[a creature suggestion!] the ampler! 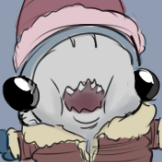 the name (and kind) of the ampler!