Hell Architect. Some sort of bootleg taken from OnI? 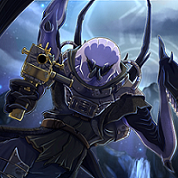 By Dovahkick,
August 22, 2021 in [Oxygen Not Included] - General Discussion