How Do You Handle Automated Rockets and Duplicants Getting Scalded Exiting a Rocket? 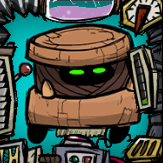 By Sigmok,
February 6, 2021 in [Oxygen Not Included: Spaced Out!] - General Discussion