How is everlasting rain in Summer possible? 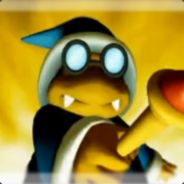 By SinancoTheBest,
September 22, 2019 in [Don't Starve Together] General Discussion