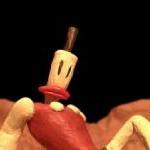 WARNING: If you are looking for the Single-Player (base-game DS/RoG/SW/HAM) version, check here. 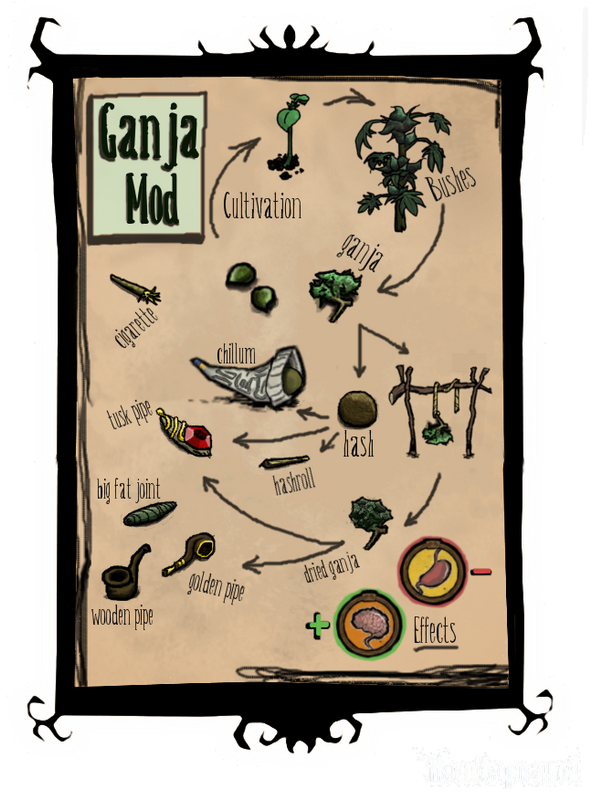 This mod was created with the obstination of two persons to see the greeny bushes in this game, we believe even some of the game devs would like to see that too and we hope you enjoy either, feel free to comment and if you can help, please do contact us.

It provides a ganja bush with 5 stages which takes about a season to end cicle, when ended it stays in old form until diggen out.

You will find them in all types of Forest Biome, the method of extraction of all stages is to dig!

In it's old stage may drop two seeds with a quarter chance, so you can reproduce your farm.

Also, in full stage you can use the razor to shave (trim) the bush, gives ganja and put the plant to old stage.

The Silviculture book from Wickerbottom works too.

Butterflies and bees are attracted and serve as a flower.

Pipes are one way to smoke ganja, they can be crafted in survival-tab and will give +5 sanity and -5 hunger on use.

Wooden have 4 uses, golden does a little more, both breaks after used.
The Tusk pipe won't break and can be filled with ganja or hash.

Simple cigarette rolls, will give you +2 sanity and -1 in life.

One way to smoke hash, difficult to craft, it will give +75 on sanity and -25 in hunger as well it will put the player to sleep, and be groggy when woke for a little time.

A rolled smokeable hash cigarette, +30 on sanity and -15 to hunger.

Can be collected from the bushes when it's grown, but wait until it's full of ganja! there's two stage you can collected, figure!

Won't deteriorate and can be crafted in refine-tab to be used in a roll or in the chillum.

Can also be traded for a good amount of gold from Pig King.

Will drop from bushes on every stage, although on full stage it may drop two.
Use them do plant ganja saplings that further will grow to bushes and so on give buds.

Ganja can be dried in the Drying Rack

Dried ganja can be traded for gold with the Pig King.

First we thank those who tried to do this before; in FourTwenty mod and Evening Flower, from which we grabbed parts of program, but in the end
it's was something else that we had created.

We didn't know lua when we started over, and we have learned alot of it with pleasure as for more knowing it's national roots, where we live.

Was very fustrating for us that klei had absolutely no documentaion for the API, and the 'makemods' text into game folder is simple a joke; "Download a mod and figure out" -- we only laughed, then worried, because we would have to learn the hard way. Reading a lot of program from others mod and game scripts, and WHITOUT INTERNET we started figuring out some things, yes we did it entirely without web, as it was made off home.

Recently I've found this site dontstarveapi.com, and it would be good to help there maybe, it's a unofficial API doc.

We build this in the period of a month, rewrote the program about six times, redraw, repaint, reanimation, corrections and color scales where redone alot.
There where about 5 versions of the bush. xD
We are very old hardcore players and tryed to balance everything well so this mode don't turn out as an overpower cheating thing like most mods do and instead just use game mechanics to be an extra asset to the game, for sake.

We have been playing this game since it's beta stage, about seven or eight years so far, an state of art. And now we proud to present you our mod.

Free software always on mind, live free or die!
Very frustating for the artist who is FOSS compilant to not have a way
to compile the art to those binary 'weird things', had to handle it
to the rwindows every time.
**The mod tools is terrible and useless!

OS:
· GNU/Linux
· Windows (if it is to be considered an system what so ever *lies*)

We have corrected all bugs found so far, please report if you get one.

-Possibly hide the percentage on tuskpipe.
-Add effects on the screen when high, or even turns the player slow a little.
-Add a gnome easter egg
-Make the mod compatible with DontStarve single-player (NOT-Together).
-Create the Weeder character, embased on a friend of ours.

** If we can, one they we will realease the 'Reign of Ganja' DLC, hahaha
with: a new giant, a new character or more, more ganja, mobs, bad trip on casual mushroom eat... gnomes.

- Fixed the bug in modmain wich pipes dont loose their uses after toke from the ground with inventory full.
- Fixed the Worldgen Options.
- Ganjabush spawn is more rare now and not configurable.