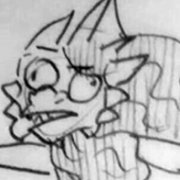 
Hey there everyone at Klei Forums, let me present myself and my most fabulous friend, @Mobbstar
Together, we went through countless hours of frustration to finally resolve this mod that in the beginning I started as something silly and that I thought would never see the light, but then again this wonderful person right here -> @Mobbstar <- offered his assistance with many, many coding THINGS. Oh by the way I helped as well with few codings and the art, but he also helped me compile the animation files and whatnot and ugh, I don't know where I would be without him.
ANYWAY here you go, months of work (because basically procrastination, guys) have resulted in this character mod in which you can basically play as the character that is me, yes? Yes, that's basically it.
Note: There might be a couple of bugs we have not seen so please do offer us with some feedback!

So, less talking and more explaining what's this mod about, yes?

Ysulyan (E-Zoo-Leahn) is a nature dragon from a world I have created a long time ago, he's also basically my persona in the internet, so I am basically doing something weird here by making him a character or something, I don't know. The thing is that we managed to CREATE this piece of work that might be-- okay I am rambling again-- ONWARD TO THE STATS.

Perks and Traits.
Ysulyan STRUGGLES with sanity in this sick little world he has been sucked into. Being so disconnected with what he loves and what he is used to seeing gives him a low pool of sanity which he must also regulate very meticulously. Keeping Sanity in check and trying to get enough wood will be your most important issue with this character, unless you know how to do your thing!

1. Being a nature dragon, he respects nature, he cherishes it beyond anything else, and thus:

2. His world has little to no ships built, and whenever he sees one he does not trust them. He also hates sailing, and this is enhanced by the fact that he has no wings to fly away in case of danger. While on the seas, his sanity drains at a fast rate. So make sure you are carrying some sanity buffs while doing so and try to do your waterborne chores as fast as possible!

3. He's a dragon, so dragoons see him as some sort of distant cousin: they are neutral unless provoked.

4. Being a nature dragon, this means he is resistant to overheating but weak to cold.

5. Praise the Sun! Energies are abundant during the day! +sanity gain during the day. He will hit harder and will be harder to hit during daytime and he will be weaker at dawn (mod compatibility thanks to @Mobbstar) and dusk, even more so at night.

6. He's allergic to gunpowder and thus he does not even know how to make it because he hates it.

7. Neither does he know how to make the armoured boat, because seriously he barely knows how a ship works.

8. Scales! He has natural armor, meaning even without any crafted gear, he can resist some damage.