For about a week, I've been having a problem with my in-game mod list - a lot of my mods haven't been being labeled properly, only displaying their workshop filenames. 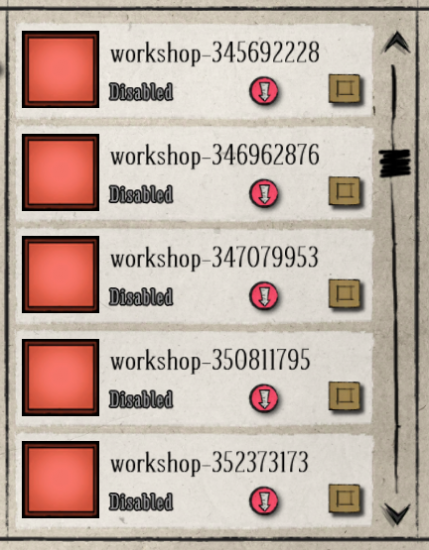 I wouldn't mind too much, but it's kind of difficult to track down broken mods if you can't tell which is which, I'm 100% sure many of the bugged mods are client-only mods since many of my client mods aren't listed anymore despite still being subscribed to them, and I'm about 86% sure that this is the reason I'm having a hard time connecting to friends' servers.

I've tried updating everything with the in-game updater, unsubscribing and resubscribing, uninstalling and reinstalling the game, switching between the main game and beta branch, and even manually deleting all the workshop files from my mods folder(though some of them needed administrator permission to delete and I couldn't remove them even though I am the administrator), but my mods still won't load in properly. Is anyone else having this problem? If you have, can you tell me how you fixed it?

Steps to Reproduce
IDK it's not technically a gameplay bug so i don't think there's a way to "reproduce" it.
Sign in to follow this
Followers 7
Go to bugs