Imagine New Challenger for Shipwrecked DLC was A MERMAID 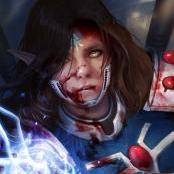 By NorthicaN,
April 13, 2018 in [Don't Starve] Suggestions and Feedback