When Woodie is added 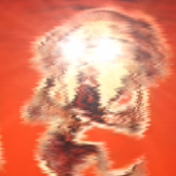 By GiddyGuy,
May 1, 2015 in [Don't Starve Together] Suggestions and Feedback