Tab Targeting Or Something? Maybe? 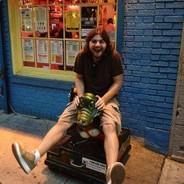 By goodguythatguy,
May 6 in [Don't Starve Together] Suggestions and Feedback