How many Winona's Catapults powered by one G.E.Merator? 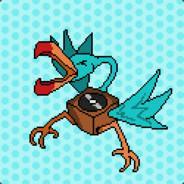 By Plentelle,
October 2, 2020 in [Don't Starve Together] General Discussion