Do these threads even work? Let's find out! (Looking for Friends to Play With) 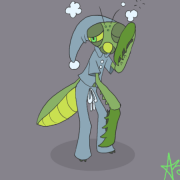 By Stonetribe,
August 21, 2020 in [Don't Starve Together] Server Bulletin