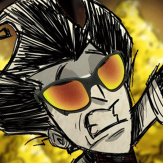 Hello survivors, I present to you our new mod, he applies custom beards according to the skin used by Wilson. After the great feedback we had with the mod  "[Fix] Beard Wilson Snowfallen", we decided to proceed with the project, and advance with the beards of the other skins, I hope you like.

For now we only have the version of it in server mode, soon we will be launching a client version, however with limited resources.

Thanks to everyone who encouraged the mod. Thank you mainly for the 6480 for having made some of these beautiful beards and the Waffe by the programming part.

Official Post:https://forums.kleientertainment.com/topic/89096-project-wilson-beard-skins/
The mod does not unlock any Wilson skins, only applies beards according to the "head " used.
Until tomorrow, we'll be releasing temporary files from the missing beards.