[solved] Characters face is displaced in game but not in spriter 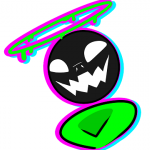