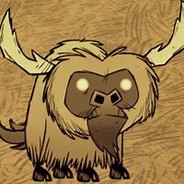 Potions that make you big and small

By Machololi, January 29, 2020 in [Don't Starve Together] Suggestions and Feedback