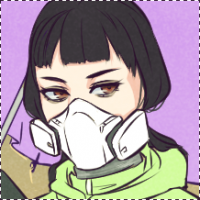 A morbid and neurotic axe swinger who refuses to take off her coat.

Spawns with a fishing rod and an axe, with the parka nearby.

Requires Shipwrecked. Can be used in RoG worlds when SW compatibility is chosen at world generation.

CHEST SLOT ---- Only parka can be equipped.

____PARKA (item)
INVENTORY -- 14 slots.
ARMOR -- Provides some defense with no durability concerns.
ELEMENTS -- Some protection against cold, moisture, burning, and wind.
AURAS -- Dulls sanity loss around disturbing things and darkness.
EFFICIENT -- Slows hunger drain, though rate will still be faster than average.
STRESS -- Immediate sanity loss upon unequip, in addition to losing the above features.
BIG & HEAVY -- Can't be carried in inventory.
MENTAL NOTE -- Mini-map icon in case you misplace it.

____MAXECHETE (item)
CHOP -- Cuts down trees faster than a traditional axe.
CUT -- Also functions as a machete.
TOOL -- Can't be used for combat.
RECIPE -- Requires 2 twigs, 4 flint, and 1 swordfish to make. Recipe found at the bottom of Tools tab, available at start.

____HUNGER HAT (item)
SLURPER PELT -- Adds a use for the pelts since the character can't equip the Hunger Belt.
HUNGER AND HAPPY -- Functions identically to the Hunger Belt.
LIGHT -- Gives off the equivalent of a light bulb when worn, keeping Charlie away.
FURRY -- Provides a tiny amount of insulation.
RECIPE -- Requires 3 slurper pelts, 2 light bulbs, and 2 nightmare fuel to make. Recipe found at the bottom of the Magic tab when using the Shadow Manipulator.

____SCALE HELM (item)
SCALES -- Adds a use for dragonfly scales since the character can't equip Scalemail.
ON FIRE AND HAPPY -- Functions identically to Scalemail.
RECIPE -- Requires 1 scale, 1 football helmet, and 2 pigskins. Recipe found at the bottom of the combat tab when using the Alchemy Engine. 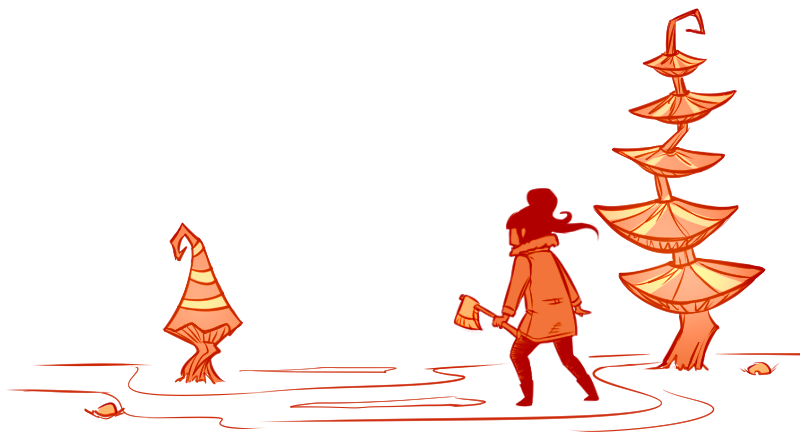 BACKPACKS -- Attempting to pick up any sort of backpack will cause the character to unequip and drop her parka. I don't know how to fix this but believe it has something to do with them both being containers. It doesn't affect playability, it's just sort of annoying to take the sanity hit on unequip and pick up the parka off the ground. I have added a configuration toggle to turn off sanity loss on unequip if you can't remember to not pick up backpacks.

SEAM RIPPER -- Doesn't work on thatchpack and sea sack. I'm okay with this since they're flammable and thus easy to get rid of.

ADVENTURE MODE -- During the final world in Adventure Mode, you will be locked out of the resources contained in the backpack at spawn since backpacks can only be opened when equipped. You can get around this by simply toggling off the chest lock in the config options if you feel you really need what the backpack contains.

How much sanity is gained on kill is dependent more on the monster than the modifier, so even when tweaked high, the difference won't be particularly evident for weak monsters

If the character is too difficult/not difficult enough, remember there are config options. You can render meat and meat dishes practically worthless with the highest setting. Want to be a glass cannon berserker on the edge? Tune down parka comfort and defense, ramp up terrain penalty, axe skill and sanity gain on kill. Live as an ocean nomad? Turn off terrain penalty and tune down meat penalty. Don't suffer unless you want to.

This mod is compatible with extra slots for backpacks and amulets. I've not tested extensively since it defeats the spirit of the character but found only a minor issue with inventory overflow. Items will not automatically insert themselves into the backpack on pick up, the backpack must manually be opened and items inserted by hand. I feel this is more a realistic feature than a bug if you do intend to go this route.

This mod is also compatible with display food values. When you hover over meat items, they will show the correct character-specific food value. 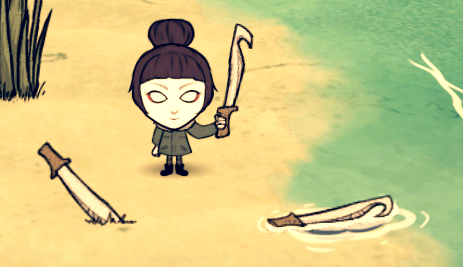 Item: New item added, Maxechete. It chops and cuts. Find it in the tool recipe tab.