I playing around with the automation tools, being inspired by youtube videos about door super compressors like this one. ( https://www.youtube.com/watch?v=8UF_nQ2htr0 )

It worked well for a long time (200 cycles or so), at least no error was visible to me. Eventually, after connecting a ton of pumps to stripmine the oil reserves, I estimated that the stored liquid (roughly 400 tons at that time) might barely reach 500 tons, before the reserves would be depleted.

A few cycles later - the pumps were still running - I noticed an unusual increase in mass... 2000(!) tons. I concluded that it I must have made a mistake in my estimation, that the doors might cover some liquid that I couldn't select.

After the pumps ran out, I checked back to see the final amount of the asteroid-wide oil - and what I got was this: over 15 million kgs of oil - almost 10 times as much as before (and that's only one tile... no idea about the grand total). With my setup, it would take over 70 hours of uninterupted pump action at x3 speed... and while there's a ton of cycles on the clock, digging down to oil happened roughly 200 cycles before the screenshot. 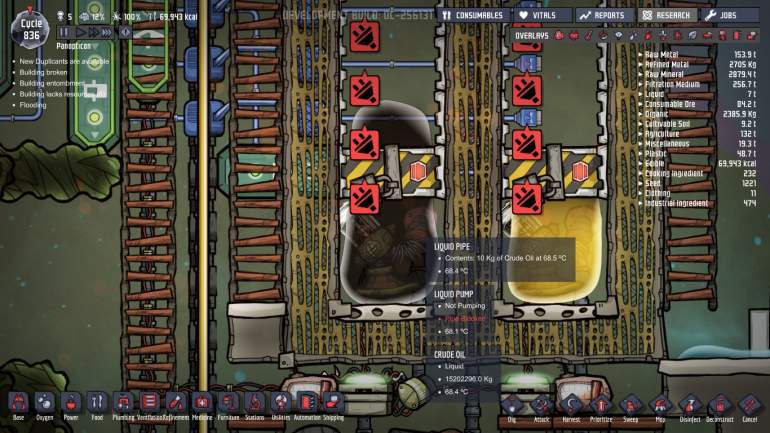 Steps to Reproduce
1) Build a door super compressor using automation tech. 2) Fill the thing with whatever you want to compress. 3) Watch as it seems to magically generates more by itself (?).
Followers 0
Go to bugs