Bug of the event setting 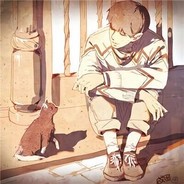 There is no Catcoon shrine in the game ,event setting is default and red bag is normally drop.only "always" have the building