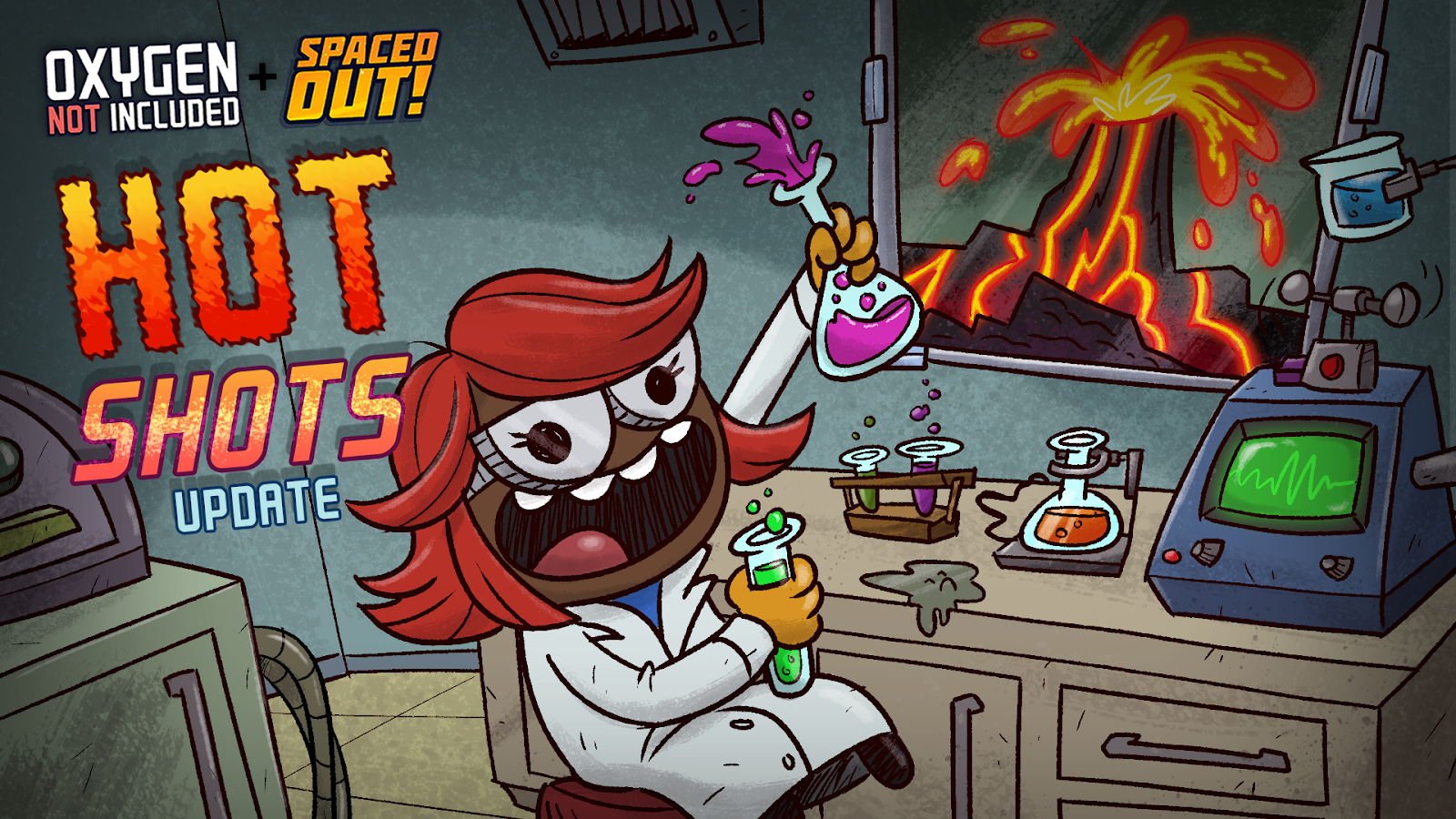 Welcome to the Hot Shots update for the base game and Spaced Out!

This is a really special one for us: not only are we adding some fun new buildings—including one that can boost geyser activity for extra-hot eruption action—we’ve also got a stowaway story trait, two new rooms and a sneak preview of ONI’s new cosmetic skins! Whew.

If you’re new to our little corner of the cosmos, you can find out more about story traits, skins and the future of ONI in the roadmap here.

New Buildings and Rooms
We added a Conduction Panel that exchanges heat with buildings that it overlaps with, offering a new way to cool down space industry buildings—or whatever else you’ve decided to build in the glorious vacuum of your asteroid’s surface.

The Mission Control Station broadcasts guidance data that ramps up a rocket’s speed during flight. It needs to be built inside one of the new rooms (the Laboratory) with a line of sight to space in order to function. The Laboratory also enables the use of the Geotuner…

We like making things go “boom” as much as anyone else, and the Geotuner is built to do just that: aim it at an analyzed geyser anywhere on your asteroid, send a Duplicant over to compile some amplification data, and your targeted geyser will automatically get a little extra juice (heat- and output-wise) the next time it’s erupting. Are we nostalgic for our old science-fair days? Maybe.

Duplicants are now rewarded with an extra large morale boost when they are given a Private Bedroom. The Private Bedroom requires a single comfy bed, a fully constructed backwall, and a few decor items to make your Duplicants comfortable.

Story Trait: Mysterious Hermit
The Mysterious Hermit is the star of our latest story trait. Convince him to join your colony (and let you repurpose his old haunt) by completing some tasks, like delivering tasty, tasty food to his curious domicile.

Preview of ONI Skins
Each Duplicant’s default outfit can now be customized in the Supply Closet screen. You can also explore different cosmetic skins for buildings and artworks there.

The ONI skins system is still a work in progress. We’re not interested in rushing it. In the future, the primary method for obtaining new skins (which we’re calling “blueprints”) will be through timed drops. For now, we’re setting everyone up with a few intro blueprints so that you can get a sneak peek at how it all works and let us know what you think.

To claim these sampler sets of ONI blueprints: Click on “Supply Closet” in the Main Menu, and hit the “Check Shipments'' button. That’ll take you to the Klei Rewards webpage, which has three free mystery shipments up for grabs—you’re welcome to redeem all three. You can then view your collection of blueprints in your online inventory or in-game, in your Supply Closet.

Quality of Life
We’ve made a bunch of quality of life improvements!
It is now possible to order an artwork (such as a canvas or sculpting block) to be cleared or replaced with a different style of the same quality. Revisions to Drywall tuning make it significantly cheaper and faster to build. Drywall and floor tiles can now replace each other (rather than requiring a manual deconstruct and rebuild). Geysers now show their calculated average lifetime output in the details panel.

And many more you can see in the full patch notes.

Summary
We’ve added a new Mysterious Hermit story trait, a Conduction Panel, Geotuner, and Mission Control Station, as well as a preview of the new ONI skins system (aka blueprints). We’ve also made some quality of life improvements and squashed a few bugs.

If your mods are breaking or you need a little extra time before switching over, you can opt in to the temporary, unsupported Previous Update branch.

As always, we welcome your thoughts on this update! Report bugs here, or share your feedback here. We read it all!