What if you lived in a fishtank, or ate a big pile of germs? These are all things to consider. 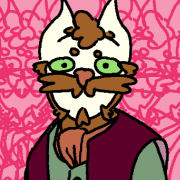 By KidneyBeanBoy,
January 29 in [Oxygen Not Included] - Suggestions and Feedback