The hottest Winter ever! 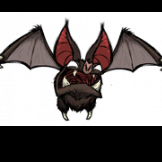 By Wumpair,
December 22, 2019 in [Don't Starve Together] Tales of Life and Death