So, a Robot and a Valkyrie walk into the Ruins... 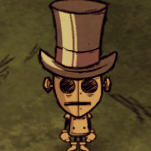 By Rocketlauncher22,
October 29, 2019 in [Don't Starve Together] Tales of Life and Death