Vargs not spawning hounds since capture. SOLVED for better or worse lol

Solution: Hounds seem to be deloaded in the ocean. I hugged the coast and saw a group loaded and started moving in the direction of the vargs. I'll make a boat and see if I can't either kill them or just follow them back home. I imagine it's a lot like the fire mechanic and the way screen activity vs offscreen activity works. That's a weird quirk since the wiki says distance will cause a Varg to spawn new hounds. They are on opposite sides of a standard size world. So to future players make sure to either teleport the varg before he gets a chance to spawn them or just be ready to go sailing. They b-line to the vargs but stop moving if you don't follow them.

Issue: I created this varg farm about 10 or so game days ago. Only a single hound is spawned by a single Varg. I've made sure they are biting at me everytime. I've checked their teleport locations and the surrounding area for stuck hounds. I've left and revisted, logged out and in and rolledback a day to see if anything changed.

I've went through a single moon event and a few more hounds spawned but nothing compared to a typical 3 varg spawnrate.

Edit: I've set one free to test it and it still will not summon hounds until it's death animation upon which a normal wave was summoned. Maybe the telelocator staff is glitching them out on PS4.

Edit 2: I've also tried making the cage bigger and I've tried killing two so there's only one left. Nothing is working and they only spawn hounds on death.

Edit 3: I've also had one chase me far away into a wide open area and still nothing until death. 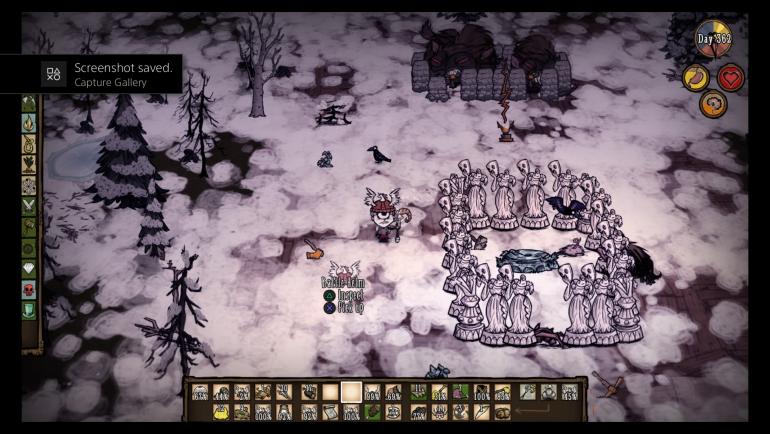 Steps to Reproduce
I created the focus, placed walls, added gems. Then I used a panflute to put the vargs and hounds asleep before teleporting them. They had already spawned hounds. When each one teleported the hounds seemed to walk towards the telelocator focus. I used a pan flute to put them asleep to reload the focus.
Followers 0
Go to bugs