When playing on my laptop at 1366X768 resolution,  the notifications in the right top corner (building entombed etc) go over the build menu, blocking the top rows of the build menu, when for example trying to build from the "base" menu, making it impossible to build things that are in the top area.

I've included a screenshot of the issue, where I'm trying to select gas pipes, I'm unable to do so because it will select the notification that's on top of it instead of the gas pipe.
This issue is probably caused by the resolution or aspect ratio, and can probably be resolved by limiting the amount of space for the build menu or notification area(making them resize based on each other, preventing overlapping),  putting the build menu on top of the notifications, or disabling the notification mouse interaction while the build menu is open, allowing the build menu to still be used.   I hope you guys can resolve this (I don't remember it being an issue on earlier versions, but I don't play much on my laptop) because it renders the game unplayable.
I've seen others have had this issue too, (It's an issue on  Windows as well) 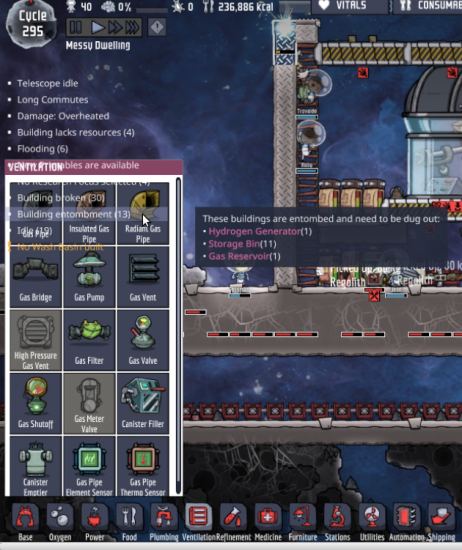