By The Plum Gate

A duplicant has traits, skills, but then it also has an explanation of what a "duplicant" statistically is to begin with, what we see on the initial selection screen is only what sets a particular duplicant apart from another and not what a duplicant's base stats are - duplicant basics simply aren't shown here. I'm filing this aspect as a bug because this this makes the "Biohazardous" trait look worse than it really is - as if they're doomed to die. The initial selection screen is shown below and it makes it look like the duplicant is dieing shortly after arrival because it doesn't tell you anywhere that the base regeneration rate is 15%, so they'll really only be regenerating 11% per cycle which isn't shown here. 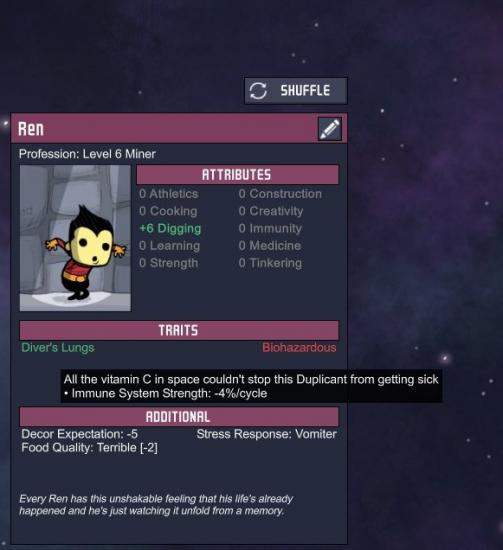 The calculated information isn't shown for most of the traits on the selection screen, one has to guess if they don't already know. In game, it tells you all the base stats, but it's kind of hidden behind a mouse-over in the information panel. 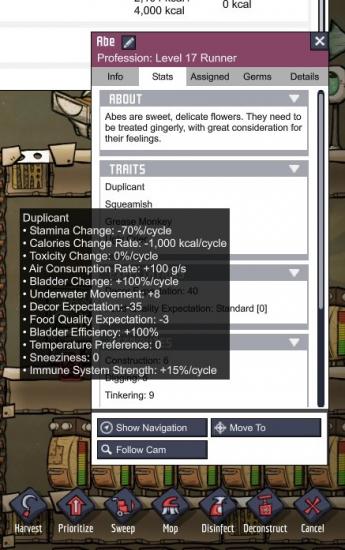 A possible solution to this is having a 'wireframe 'of a dupe and these statistics above to explain what a dupe is to begin. This could be off to the right or left of the three starters. If this were a reactive panel - when you mouse over or activate a duplicant selection panel, the wireframe duplicant would show the various calculated stats for that particular selection and give more insightful information about how positive and negative skills and traits affect the duplicant as a whole.

Steps to Reproduce
Start a game, shuffle through until you hit a dupe with the biohazardous trait and examine the various skills and attempt to discern the meaning of said biohazardous trait. For new gamers those unfamiliar with the base statistics of a duplicant, it looks like the duplicant will be losing immunity ad infinitum.
Sign in to follow this
Followers 1
Go to bugs