Gas rocket port loader has gone to idle despite having power, gas and the rocket tank still not full.

The Rocket is actually a simple storage device at this time without engine or nosecone but started with the gas tank (Large) to be able to fill it fully with hydrogen - Selected 11,000 and hydrogen and attached a rocket port loader to the left hand side complete with power and input from several gas reservoirs full of hydrogen.

The loader commenced working - and worked up until the gas ran out. At this point I saved for the night and came back the next day - only to find that when more gas came along it didn't load this - it was showing idle despite having power and having gas in the input pipe - AND indeed 999.7g of Hydrogen in the Loader itself. [Edit - the loader had loaded 365/11,000kg on my save and can provide a save file if needed]

I found a work around - simply build a second Gas port loader onto the left of the existing one and as soon as it was built, the first loader immediately started loading!!! - even though the second loader had no power or gas input. I then deconstructed the second one and the first and original loader continued loading the remaining hdyrogen.

I haven't saved and reloaded again yet to see if this happens again, but suspect that adding a second loader simply resets a flag or a test where the initial one has now started failing the test.


1. Construct rocket platform (There will be no full rocket - just the gas storage module)
2. Add Large Gas Cargo Canister and set to Hydrogen and 11,000 storage
3. Add Gas Rocket Port Loader to left side as shown in the picture in the description.above.
4. Add a couple of Gas Reservoirs full of about 300kg Hydrogen - add power and pipe to the loader.
5. Allow the Loader to work until the 2 reservoirs are empty and it will stop with "Empty Pipe"
6. Save and reload
7. Add more gas into the reservoirs and notice that the loader will still say IDLE.
8. Construct another Loader to the left of the existing loader - without power and without pipes
This will start the existing loader as you can see below 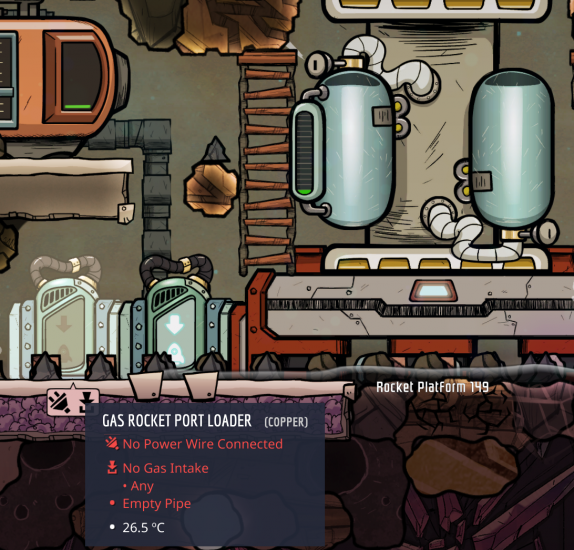