So, I've encountered a lot of new bugs as of the Expressive Upgrade, here's a list of them

Stuck Dupe Glitch: Dupes will randomly stand in one place trying to complete an action (ie. delivering). The dupe can glitch it's animations while doing this, and they will be immobile, when clicked on it says wich action they're trying to do, so it's not idling. Might have to do with the animations displayed when completing research, as when manually moved they have done their Clap/Happy animation, all though these animations have only played 2 times while glitched.

Stamina Recovery Glitch: When sleeping, some dupes will not gain Stamina. the dupe will sleep, but will lose stamina as if they were awake. 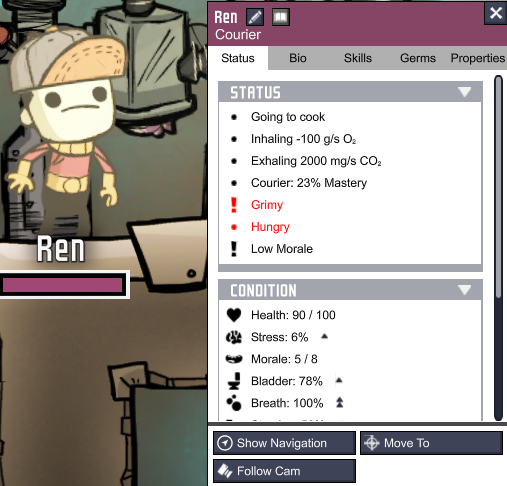 Stuck Dupe, as you can see they're standing still, yet they're "Going To Cook" 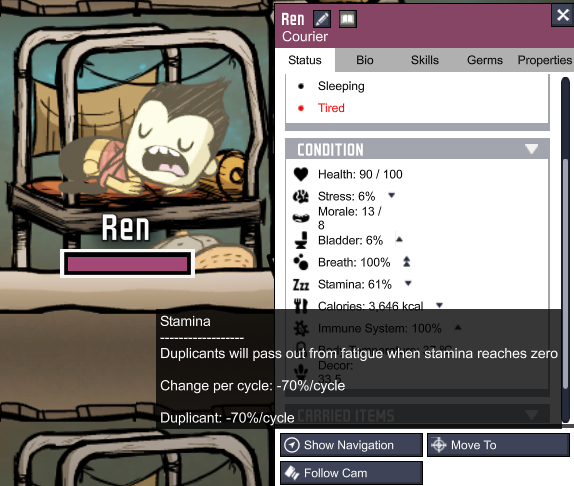 Stamina Glitch, The duplicant is Sleeping, yet they're not recovering Stamina, this glitch is not exclusive to daytime and can happen at night aswell.

Despite both images being of the same duplicant, the glitches can happen on anyone as far as i know.

Steps to Reproduce
I don't know exactly what steps are required. i created a fresh save on the expressive upgrade and started playing as usual and randomly encountered these glitches. i'm researching most of the time while playing.
Sign in to follow this
Followers 0
Go to bugs