First and foremost, can I give a big shout out to the guys at Klei Entertainment, I played a lot of hours on your previous game "Don't Starve" and I'm thoroughly impressed with your latest creation despite all the bugs.

Secondly I was trying to do a playthrough that didn't involve using sand to filter water so naturally I used contaminated water to make 2xh2 and o2  to save my clean drinking water supply and just used the sand early on in the air filters. I'm sure many have alread figured out that sand can ONLY be found in the initial biome and once that resource is depleted there's no other remedy. I was looking for an alterative method of purifying water and also purifying contaminated oxygen after the sand runs out.

I read somewhere on one of the forums you could turn dirty water into clean water using the heat from the batteries and I gave it a shot, 5x5 of the big batteries double insulated with the air mesh in between each battery, but the results weren't amazing. a layer of hot water floated on a layer of hot contaminated water and steam would appear briefly then go back to water again despite being 130 degrees, well above the threshold to be classed as steam. You kinda need to use the liquid filter because the steam only stays steam for one tile then goes back to water again.

This then gave me an idea which nobody else I think except you devs attempted which was to try and get rid of contaminated oxygen through the process of cryogenics. I pumped air into a daisy chain of 16 thermal couplers and I reahed -221.66 degrees C!!!!

I build a double double walled freezer chamber to capture the liquid oxygen but as you can see I spent about 20 tons of coal to produce 31.8g of liquid oxygen. Enormous amounts of power consumed in an attempt to purify such a small amount. The problem is that the liquid oxygen doesn't re-evaporate into clean gaseous oxygen.

I think you guys need to work on this bug, you need a hysteresis function whereby fluids and gases must remain at a certain temperature until a heat threshold has been overcome then it can change from gas to fluid and vice versa. The game's thermodynamics clearly understands the difference between heat and temperature already.

Great game so far though! Great Artwork, playing with gases has never been so much fun! 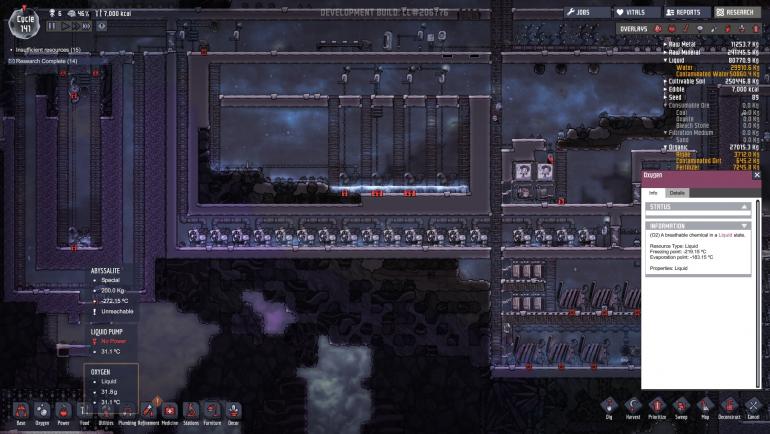 Steps to Reproduce
pump air into 16 temperature coolers with insulated pipes and the end of the daisy chain have a single vent that outputs the gas into a well insulated chamber, liquid oxygen will form, but the oxygen won't turn back into gas oxygen once it reaches its evaporation point.