CRASH while attacking the Masked Pig with Maxwell

So this crash actually happened to me 3 times (over a pretty short period of time) . One of them I already reported via the In-Game-Feature, but after thinking about this a little more I decided to give this bug report here a go since I remembered a few details which might help to track down this bug (and which I didn't provide in the In-Game Bug Report).

While I was playing as Maxwell I attacked the Masked Pig while I had 2-3 Shadow Puppets active. My Sanity was around the Insanity Threshold (actually I'm not completly sure wether I was already insane or the screen was just very shaky) and I switched right before the attack from the Dark Sword to the Halberd. This happend once while it was Daytime and twice while it was Dusk. Once this crash happend after I ordered the attack but before I (Maxwell) reached the Thief but while my Puppets were standing right around the thief and once this happend right after I actually did the attack and my Shadow Puppets were a little further away. (About the third thime I'm not sure anymore...)

Mods: I'm using the Geometric Placement Mod; it should not have any interaction with this issue but just in case. No other Mods are used.

And now to the funny part: I tried reproducing this via console commands and I was not able to do so in around 5 tries. And even in my normal Game I was not able to reproduce this crash voluntary until now (but I just had 2 tries until now). When I'm preparing for a crash while seeing the Thief it just workes fine... until now.

Because I already submitted my files via In-Game-Bug-Report I forgot to take a screenshot / save the logs to add here, but if this happens again I will add them.

And some additional Information (I don't think it has anything to do with this crash; but just in case): This happend in 2 diffrent worlds in both all seasons were changed to long, no boons are allowed to spawn and the glowfly cycle is disabled.

Edit: This Crash just happend again, without active Shadow Puppet's  and while being completly sane. I have no clue what causes this crash. I will deactivate my Mod's an see if this happens again in a new world. Ah... and I forgot to mention it: Validating the game files just gave back that no files are corrupted. 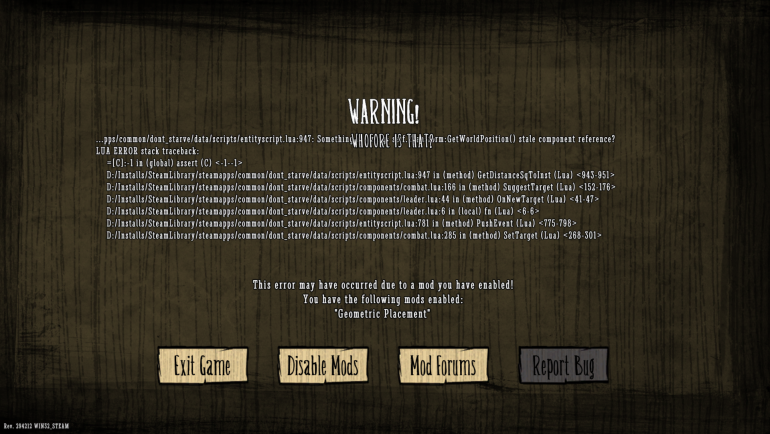