What do you think of the new skins? - General Discussion - Klei Entertainment Forums Jump to content 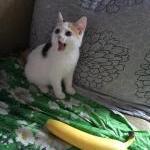 forge What do you think of the new skins?

By FortuneCat, November 6, 2018 in General Discussion