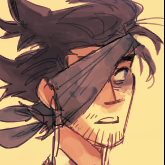 HERE COMES THE JUMP KICK (an art and cosplay thread)