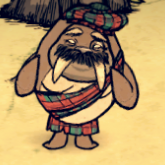 Pick/Axe is still craving for a buff

By SadeceAtakan, September 27 in [Don't Starve Together] Beta Branch